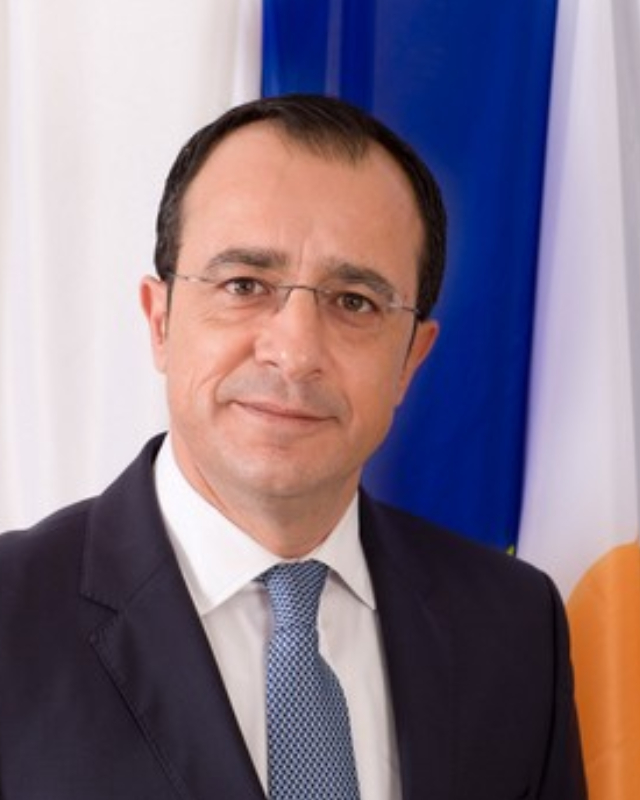 Nikos Christodoulides was born on 6 December 1973 in Paphos.

He was a career diplomat between 1999 and 2013. During this time he served as Director of the Office of the Minister of Foreign Affairs, Spokesperson of the Cyprus Presidency of the Council of the EU in Brussels, Deputy Chief of Mission at the Embassy of Cyprus in Greece, Director of the Office of the Permanent Secretary of the Ministry of Foreign Affairs, and Consul General at the High Commission of the Republic of Cyprus in the UK.

Prior to his appointment as Minister of Foreign Affairs, he served as Director of the Diplomatic Office of the President of the Republic of Cyprus (2013- 2018) and Government Spokesman (2014-2018).

He was a Lecturer and Research Associate at the Department of History and Archeology of the University of Cyprus between 2007 and 2010. He is the author of two books, Plans for Solution of the Cyprus Problem 1948-1978 (2009) and Relations between Athens and Nicosia and the yprus Problem, 1977-1988 (2013). He has also published extensively in domestic and international journals.

He is married to Philippa Karsera and has four daughters, Ioanna, Ekaterini, DespinaMaria, and Phoebe.

Keynote address by Foreign Minister Nikos Christodoulides at the online discussion organised by 'Cyprus Youth Diplomacy' οn “Youth for Multilateralism:  The UN we want”   “The importance of multilateralism:…

[Opening remarks during panel discussion on "Energy Diplomacy in Turbulent Times: Is there hope for peace and mutual understanding", with participation also by the Greek Foreign Minister, Nikos Dendias,…

5 Nov.2020 - Address by FM Nikos Christodoulides at the 2020 Thessaloniki Summit

[Speech in panel discussion on "The Eastern Mediterranean in crisis"]   Esteemed participants, Ladies and gentlemen, First and foremost I wish to thank the organisers of this year’s Thessaloniki Summit. I…

Intervention by the Minister of Foreign Affairs Mr. Nikos Christodoulides at the PSEKA virtual meeting on the occasion of the somber anniversary of the 1974 Turkish invasion in Cyprus   Madam Speaker,…

26 Dec. 2020 - FM Christodoulides makes the case for effective multilateralism in interview to EMA

Interview by Minister of Foreign Affairs Nikos Christodoulides to the Eastern Mediterranean Affairs Magazine (EMA)* [As published in Issue I, Dec. 2020]   It has become relatively obvious that Covid-19…

Keynote article by the Minister of Foreign Affairs of the Republic of Cyprus, Mr. Nikos Christodoulides, as it appears in the December 2020 edition of the Bimonthly Electronic Newsletter of the Cyprus…

The following piece was reported on Euronews website, from the interview given by Foreign Minister Nikos Christodoulides to Efi Koutsokosta.on 21 September 2020, at the end of the Foreign Affairs Council…