The Ministry of Foreign Affairs, as the main actor responsible for the exercise of the State's foreign policy, has as its mission the safeguarding and promotion of the interests and rights of the Republic of Cyprus and its citizens, as well as the Republic's contribution to international efforts to promote peace, stability and security.

Due to the developments and the ongoing economic, political and social transformations taking place in the international arena, there is a constant need for readjustment, among other things, of diplomatic action, in order to effectively manage and address the challenges and opportunities that arise.

In this framework, after evaluating the current international situation and as part of a broader reform process the Ministry proceeded last year to adopt a readjusted strategic plan taking into account the findings of a public consultation that was organized on that subject matter earlier in 2019. This plan is built on the vision of pursuing a multidimensional foreign policy with a clear orientation and focus of the work carried out on the protection and upgrading of the international presence of the Republic and on strengthening its role as a pillar of stability in the region. The primary goal of a substantial contribution to the efforts to resolve the Cyprus problem remains at the forefront of the Ministry of Foreign Affairs’ action.

The Strategic Plan of the Ministry concerns a rolling period of three years and is reviewed regularly on the basis of the conclusions of the six-month monitoring of the implementation of the plan by the central Administration and the Diplomatic Missions of the Republic.

The 2021-2023 Strategic Plan includes the priorities of action of the Ministry which arise from its main objective to contribute decisively to the maximization of the added value of the Republic in its international relations through actions of synergy and cooperation.

The main priorities set in the current Strategic Plan are the upgrading of the Republic's action in the framework of regional cooperation, the maximization of the added value of Cyprus' EU membership, the strengthening of the Cypriot presence at the international level and the enhancing of its external action.

Organisation of the Cyprus Ministry of Foreign Affairs 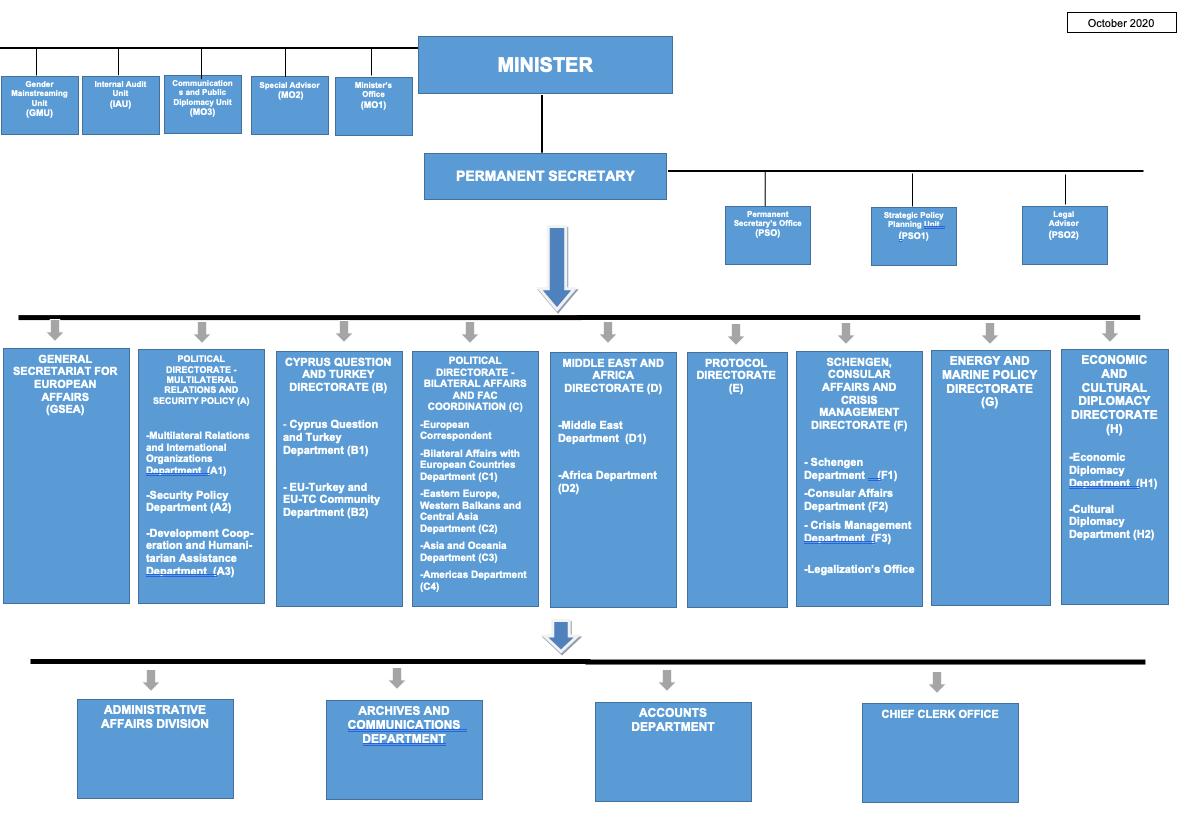 The budget comprises mainly expenses that arise from contractual obligations (€80.6 million, amounting to 78% of the total), such as obligatory contributions to International Organisations (€5.8 million), contribution to the UN peacekeeping force in Cyprus (€15.5 million), contributions by way of Humanitarian Assistance (€3.5 million) or Development and Technical Assistance to other countries (€6.4 million), rent of premises in Cyprus (€1.1 million) and abroad (€7.7 million), payroll costs for permanent and locally employed staff abroad (€26.6 million), as well as other expenses for development, such as for purchase of equipment and purchase/construction/improvement of the efficiency of buildings (€14 million).

The remaining amount stands for the operating expenses of the Ministry of Foreign Affairs and the Diplomatic Missions (€22.1 million, or 22% of the total).

The Ministry's Budget for the year 2023 is available (in Greek), by clicking here.