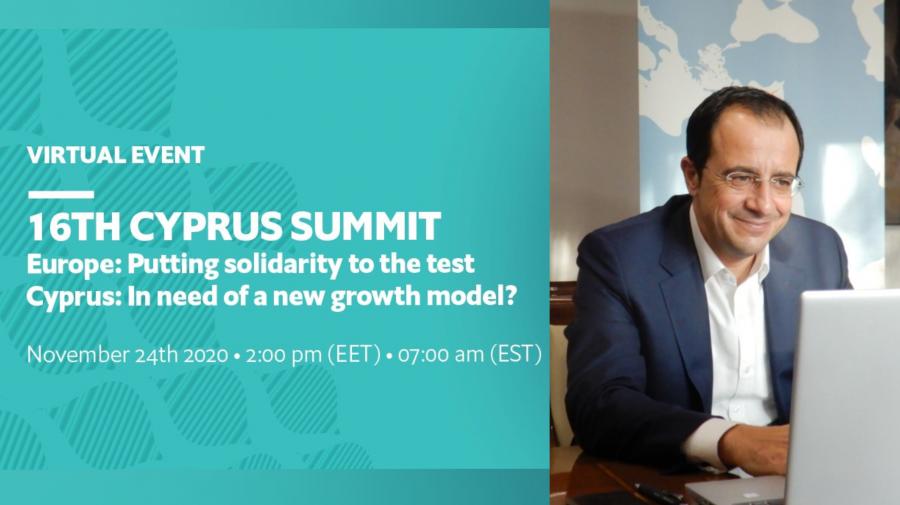 [Opening remarks during panel discussion on "Energy Diplomacy in Turbulent Times: Is there hope for peace and mutual understanding", with participation also by the Greek Foreign Minister, Nikos Dendias, and former US Undersecretary of State, Nicholas Burns]

This year The Economist is demonstrating in practice its adaptability and versatility. In the midst of the pandemic, it is proceeding unfazed with the organization of the Cyprus Summit, this time bringing us together virtually.

And perhaps never before has the Economist Summit been more relevant; as the world is eagerly looking for a way out of a health crisis that has also bred an economic crisis, as governments are put under immense strain to respond and adapt in order to effectively manage a multifaceted challenge, coming together to discuss and exchange ideas is invaluable.

Yes, I strongly believe there is hope for peace and mutual understanding in the Eastern Mediterranean. My optimism might at first sight sound naïve, but I assure you it is substantiated.

It might not be the obvious answer in the midst of turmoil in this fascinating region, but if one looks closely, beyond the narrative of turmoil that makes the headlines, to a parallel narrative that is being written in the region by the region, I believe the case for hope can convincingly be made.

The Eastern Mediterranean and the Greater Middle East is fascinating for its diversity and its complexity.  It is a region of increasing geostrategic importance, both for the challenges but also for the promises it holds. To start with, the region is witnessing remarkable demographic and social change. The shift in global economic power that we have been witnessing has placed the Middle East firmly in the middle of the world’s fastest-growing markets and at the heart of fast growing trade flows. It is a young region, with over 40% of its population under the age of 25 according to the United Nations data. The population of the Gulf States is doubling over the past 20 years. There are over 3,5 trillion euro worth of projects planned or under construction in the Middle East and North Africa.

Energy is a key area that points to the potential of the region and how it can contribute to building a more stable, prosperous future, but also how it can be instrumental for greater energy security in Europe. The presence of energy giants in the region such as EXXONMOBIL, ENI, TOTAL, NOBLE, SHELL is proof of its energy potential.

Our viewpoint is that hydrocarbons can become the new coal and steel, in a new regional context. A tool of cooperation and synergies that would create an economy of scale, an inviting environment for companies and investors; a tool that would meet the energy security needs of the region and that of the EU, and gradually contribute to greater stability in relations among countries of the region and promote security and peace. An economic project but also a political project, with a spill-over effect that could be catalytic in resolving long-standing problems.

Cyprus, together with Greece and other countries of the region, such as Egypt, Israel, Lebanon, Jordan, the United Arab Emirates, have sown the seeds for such a development, through the innovative trilateral cooperation mechanisms established in recent years. These were in fact triggered by the field of energy– which also led to a web of delimitation agreements fully in line with international law, creating the necessary legal certainty for exploitation – but have since expanded into an array of other areas such as security, economic cooperation, environment, education and innovation. It is important to stress that these fora have a positive agenda, they are inclusive, open to all countries in the region that respect international law, good neighbourly relations, the sovereignty and sovereign rights of all their neighours.

These cooperation mechanisms are constantly evolving, expanding both thematically and in terms of format and participation. For example we had the meeting in Cairo at ministerial level of Cyprus, Greece and Egypt, joined by France and Italy. We also had in the midst of the pandemic, a virtual ministerial conference with the participation of Cyprus, Greece, Egypt, France and the United Arab Emirates, on issues of security. Preparations are under way for the organization in the coming weeks of more multilateral meetings, with countries of the region participating for the first time.

At a time when due to the pandemic states are led to insularism, shying away from cooperation and multilateralism, Cyprus, as well as other like-minded countries in the region have opted for a different path, enhancing their mini-multilateral cooperation, including to address the pandemic. There are several concrete examples that synergies are growing.

To mention just a few, on 22 September of this year, the Statute of the Energy Forum established in Cairo with the participation of Egypt, Cyprus, Greece, Israel, Palestine, Jordan and Italy was signed. Also on the energy front, the interstate agreement on the East Med Pipeline was signed in Athens between Greece, Cyprus and Israel. Discussions between Lebanon and Israel on the delimitation of their maritime boundaries have restarted. Moreover, the institutionalization of the trilateral mechanisms was also decided, with the establishment in Nicosia of a Secretariat, which is expected to start operate on 1 January 2021. More recently, the Governments of the Republic of Cyprus and the United States signed an agreement for the establishment in Cyprus of a Regional Training Centre (named “CYCLOPS”) for security on land, open seas and ports. And last but not least, we have had the agreements for normalization of relations between Israel, UAE and Bahrain.

It is my conviction that cooperation developed in the region, which is based on a strictly positive agenda, has created a dynamic that could lead to the creation of a regional organisation, or a regional forum for Security and Cooperation when the political conditions permit. In fact, the greater Middle East is one of the few regions where such an organization does not exist. Such an organization will be inclusive, and with the only pre-requisites for membership being respect for international law, commitment to good neighborly relations, and respect to the sovereignty, sovereign rights and territorial integrity of every country.

The long term goal of the establishment of a Regional Body, will not only fill a vacuum that we are seeing in the region but will also send a clear signal in favour of multilateralism, at a time when its added value is under attack. Last but not least, it will send a clear signal to countries in the region that are acting as spoilers to stability and cooperation that the only viable, beneficial path, is not that of gunboat diplomacy, but that of respect of international law, good neighbourly relations, respect for the sovereignty and territorial integrity of neighbors. As I have already mentioned, no country in the region is excluded from this web of cooperation.

It is also my conviction that the tangible value of the cooperation proliferating in the region could have, as I mentioned earlier, a beneficial ripple effect in resolving problems, such as the Cyprus Problem. Certainly, Mr. Erdogan has not given any signs that he makes decisions based on international law and norms – quite the contrary. Yet, I believe that a rational thinking Turkey will come to understand that the path that serves its long term interests is not the one of confrontation, defiance of international law, interference and destabilization – the path it is following in the Mediterranean Sea, the Aegean, in Libya, Syria, Iraq (the list is long). Rather, it should join other countries in the region in cooperating to materialize a vision of peace and prosperity.

In concluding, I wish to note that the cooperation we have been witnessing in the region, and ultimately the creation of a regional platform, not only serve the interests of countries involved, and the region as a whole. They also constitute a positive development for other international actors such as the EU.

Energy diplomacy, which is part of a vision that the overwhelming majority of the countries in the region, has opened new avenues for cooperation and understanding. We call on countries that have yet to realise that this is the only viable avenue, to abandon policies of a past era, and join us.