27 Oct. 2020 - Statement to the Press by Minister Christodoulides at the end of Trilateral Meeting CY-GR-ISR in Athens 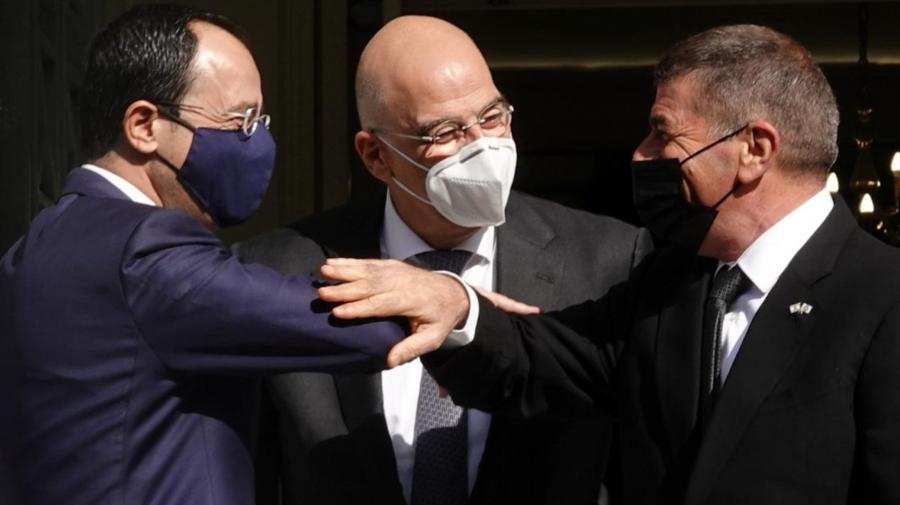 It gives me great pleasure to be in Athens in the framework of the trilateral cooperation mechanism between Cyprus, Greece and Israel. I would like to warmly thank the Minister of Foreign Affairs of Greece, my friend Nikos, for the invitation and the hospitality, and to express my satisfaction at the opportunity to meet again with my friend, the Minister of Foreign Affairs of Israel, Gabi.

The fact that we meet despite the difficulties for all of us due the pandemic, demonstrates the strong commitment and determination of our three countries to strengthen our trilateral cooperation. A partnership founded on mutual respect, a positive approach, trust and a strategic understanding of the significant benefits it brings at the bilateral, regional and international level.

Undoubtedly, the pandemic has further highlighted the importance of regional cooperation and multilateralism. Now, more than ever, it is becoming clear that solutions to common challenges can only emerge through synergies and cooperation within a positive agenda, such as that governing our trilateral cooperation mechanism. Synergies aimed at promoting peace, stability and security in the Eastern Mediterranean, under international law, including the law of the sea, and the basic principle of good neighborly relations.

The trilateral cooperation mechanism between Cyprus and Greece - two European Union member states in the Eastern Mediterranean - with Israel, a neighbour with which Cyprus and Greece maintain historically close relations, is part of the wider efforts and initiatives being developed in the Eastern Mediterranean region to promote security, stability and cooperation.

In this context, during today's deliberations we discussed regional developments, including developments in Libya, Lebanon, Syria, the Cyprus question and the Middle East Peace Process.

Our friend the Israeli Foreign Minister briefed us on the recent, historically important agreements for the normalization of Israel's relations with the United Arab Emirates, Bahrain and Sudan. These developments ― and I would like at this point to congratulate Gabi on the important role he played ― among others we have seen, as well as others we are working for, are fully consistent and contribute to the vision of the tripartite cooperation in the region: the promotion of peace and stability in the Eastern Mediterranean and of a multilateral scheme for Security and Cooperation.

The recent signing of the Statute for the East Med Gas Forum - is another development in this direction, as it is undoubtedly a model of regional cooperation and an important step that paves the way for further multilateral, thematic cooperation, without any exclusions.

Unfortunately, while a number of positive developments and actions aimed at achieving the goal of peace, stability and security in the region are under way, Turkey is the exception, as it escalates tensions and undermines regional stability through a series of illegal actions. We see this not only in Cyprus and Greece, but also in Syria, Libya, Iraq, and beyond.

Both I and the Greek Foreign Minister informed our counterpart on the escalating provocations of Turkey and its illegal actions in the EEZ of Cyprus, in the maritime zones of the Mediterranean and the Aegean, where Ankara continues its illegal drilling and seismic investigations. For my part, I also briefed them on the illegal Turkish actions in relation to Varosha, in violation of the relevant Security Council resolutions. These actions undermine stability and security in the region and do not help the efforts of the UN Secretary-General for the resumption of negotiations from where they stopped in Crans Montana with the sole aim of reunifying Cyprus on the basis of the agreed solution framework, the bizonal, bicommunal federation.

With my friends the Ministers, through the review of our cooperation so far, we examined the progress made and exchanged views on ways to further reinforce our actions in areas such as the economy, tourism, technology, science and innovation. We also discussed the prospect of enlargement (on specific issues) of the Cyprus-Greece-Israel trilateral mechanism with other countries in the region - and beyond - and I believe that soon there will be developments and announcements in this direction.

Our goal is to continue on the path of cooperation and synergies with a positive approach, inviting all States of the region, without any exclusion, but with the obvious precondition as a minimum: respect for International Law, the territorial integrity of each State and the principle of good neighborly relations.

Concluding, I would like to thank again my friend Nikos for hosting today's meeting which gave us the opportunity to set new goals to further enhance our trilateral cooperation.

I look forward to our next meeting which I am sure will take place very soon.