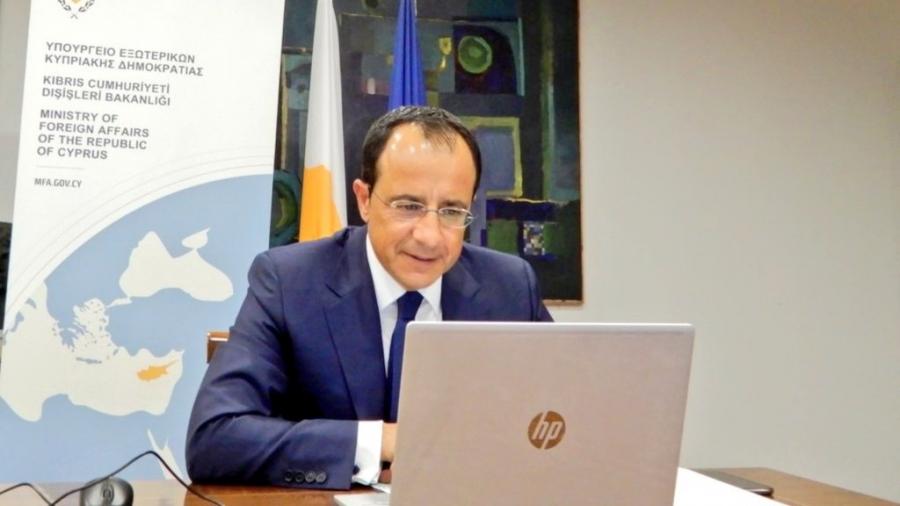 Intervention by the Minister of Foreign Affairs Mr. Nikos Christodoulides at the PSEKA virtual meeting on the occasion of the somber anniversary of the 1974 Turkish invasion in Cyprus

Let me start by thanking each and every one of you for your virtual presence to this commemorative event, on the somber anniversary of the 1974 Turkish invasion.

Thank you for your long-standing, personal interest in Cyprus and the region.

I wish to also express my sincere appreciation to PSEKA for their initiative to organize this event, and putting together such an outstanding panel, despite the challenging circumstances due to the pandemic. With this opportunity, I would like to express Cyprus’s heartfelt support to the United States and its people in fighting this pandemic.

Thank you Andy for your invaluable contribution, as always.

As a historian, and an academic in my past life, I tend to look at events contemplating how future historians will come to assess them in hindsight. We are certainly living in unprecedented times for the 21st century. The world is witnessing remarkable changes, amplified and accelerated by the coronavirus pandemic that is hastening the shift in the global balance of powers. And so, our discussion today is very much timely.

The historical event that we are called to remember and reflect on today is the 1974 Turkish invasion of Cyprus, which is undoubtedly a turning point and an open wound in the history of the country and its people.

Turkey found the pretext to impose its partitionist plans against Cyprus following the coup of July 15, 1974, and viciously invaded Cyprus, violating all rules of international legality, including the UN Charter. The consequences, devastating and enduring -

Close to 200.000 Greek Cypriots forcibly and tragically displaced, to this day prevented from returning to their homes.

Thousands of Greece Cypriots killed, with a number still missing, including US citizens, their families still looking for answers purposefully held back by the Turkish government and military.

Over 36% of the Republic of Cyprus territory, representing 70% of the economic potential, under the occupation.

The implementation, in violation of international law, of a deliberate policy of altering the demographic, cultural and religious character of the occupied areas. Turkey’s recent arbitrary decision to change the status of Hagia Sophia, in an effort to distract public opinion internally, despite reaction by the international community, is unfortunately all too familiar for us in Cyprus.

Over 160,000 colonists from Turkish Anatolia brought to the occupied areas, with approximately 40,000 Turkish occupying troops still illegally stationed in Cyprus.

At these challenging times for the international community due to the coronavirus pandemic, when countries have for the most part come together to fight a common enemy, Turkey has opted to take advantage of the situation, further escalating its provocative, illegal actions.

In what can only be described as severe escalation of Turkey’s policy of violations of the sovereign rights of Cyprus, Turkey’s 6th illegal drilling operation in less than a year is underway. This time Turkey’s actions take place within a block in our EEZ just 51 NM off the southwestern shores of Cyprus, and 154 NM - that is triple the distance - from the shores of Turkey. This is a block duly licensed by Cyprus to European companies, and within an area delimited, fully in line with international law, between Cyprus and Egypt.

Meanwhile Turkey’s illegal, consecutive seismic surveys continue in the Cyprus’ southern EEZ/continental shelf since January 2019. And of course, this activity is coupled with heavy militarization of the seas around the island by the Turkish navy, putting the security and stability of the region at risk.

It is important to understand that Turkey’s provocations do not take place in a vacuum, but rather aim to promote Erdogan’s hegemonic ambitions. There can be no doubt that Turkey’s actions in the maritime zones of Cyprus form part of its overall revisionist policy exemplified, by its expansionist action in Syria, its interventions in Libya, its recent invasion in Iraq, as well as its illegal actions in Greece’s maritime zones and airspace.

In Greece, we have been witnessing the daily, systematic violations of its airspace and the effective, shameful weaponisation of migratory flows to Europe. At the same time Turkey is threatening with announce drillings off the coast of Greece.

In Libya, the escalating Turkish military involvement is not only aggravating the conflict but also shifting the balance of powers.  The increased Turkish air and naval activity in Eastern Med clearly signals that Ankara is determined to pursue its strategic goals in the region and is prepared to enforce this through military means.

Turkey’s employment of gunboat diplomacy, its aggressive neo-Ottoman vision, its belligerence against rule of law must alarm the international community that needs respond in a coherent, firm manner to Mr. Erdogan’s increasingly authoritarian, erratic behavior.

In a region that is volatile, but one that holds enormous potential, and where in recent years Cyprus together with other countries in the region such as Greece, Israel, Egypt, Jordan, UAE have worked to forge strong partnerships through cooperation and synergies, Turkey is a dangerous spoiler. It is simply not enough for the international community to verbally reject Turkey’s actions. It must act in solidarity, and with determination, before it is too late.

The United States, a permanent member of the UN Security Council, and a key player, has a particularly important role to play in exerting its influence on Turkey to de-escalate, not only in support of its partners, but also for the benefit of the whole region, and to protect its own interests, which are at stake.

In closing, it would be an omission not to refer to the significant steps that have been taken in recent years in elevating Cyprus-United States relations.

Cyprus has invested significant political capital in our relations with the United States because we believed in the importance of tangibly enhancing our long standing partnership to a strategic level, always on a positive agenda, to the mutual benefit of both countries and of our region.

I can confidently say that important progress has been made, both at the bilateral and the regional level. I want to stand on security because it is important and because it is an area where a lot has been achieved. Security dialogue has been expanded with many of our neighbors, and we have become increasingly involved with a common purpose to enhance the stability and peace in the eastern Mediterranean.

In short, the developments of the last few years in the field of security in our very volatile part of the world have shown Cyprus to be a reliable partner in the regional security structures. Mr. Erdogan’s revisionist, aggressive policy threatens all that has been achieved in the region. The international community, the United States, have a duty not to allow Mr. Erdogan to transform the region into a source of conflict and destabilization.

We need to act now, because tomorrow the situation created by Mr. Erdogan might be irreversible.