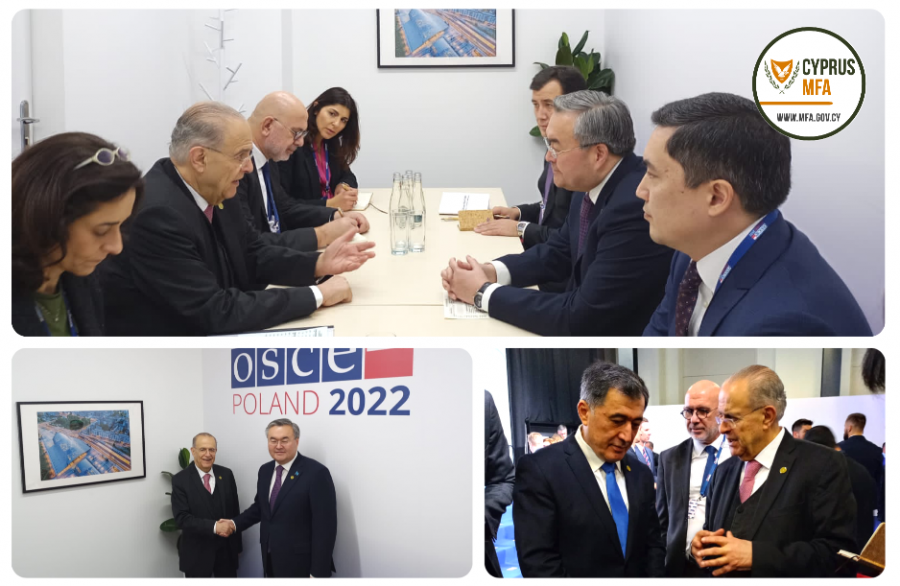 On the sidelines of his presence in Łódź, Poland for the Ministerial Meeting of the Organization for Security and Cooperation in Europe, the Minister of Foreign Affairs, Mr. Ioannis Kasoulides, had today separate meetings with his counterparts, the Foreign Ministers of Kazakhstan, Mr Mukhtar Tleuberdi and Uzbekistan, Mr Vladimir Norov.

The two ministers pointed out in their discussions with Mr Kasoulides that the attitude of their states is governed by adherence to international law and respect for the sovereignty, territorial integrity and independence of all states including the Republic of Cyprus, in accordance with the Resolutions of the Security Council on Cyprus. The two states condemn any separatist action and unilateral declaration of independence as they are also concerned about possible implications that such a development would have in the Central Asian region.

The views of the Ministers of Foreign Affairs of Kazakhstan and Uzbekistan are consistent with the fact that the amendment to the statute of the Organization providing for the acceptance of entities as observers has not been ratified. At the same time, granting observer status as an entity does not constitute an act of recognition of the pseudo-state.

As far as the bilateral relations between Cyprus and Kazakhstan are concerned, Mr Kasoulides and the Minister of Foreign Affairs of Kazakhstan, Mr Tleuberdi agreed to intensify the effort to conclude bilateral agreements on a number of issues and to proceed with political consultations. Also, the two ministers agreed on the future opening of General Consulates on both sides under the condition of an air connection between Cyprus and Kazakhstan with direct flights.