13 Oct. 2020 - Statement to the Press by FM Nikos Christodoulides after meeting with German FM Heiko Maas 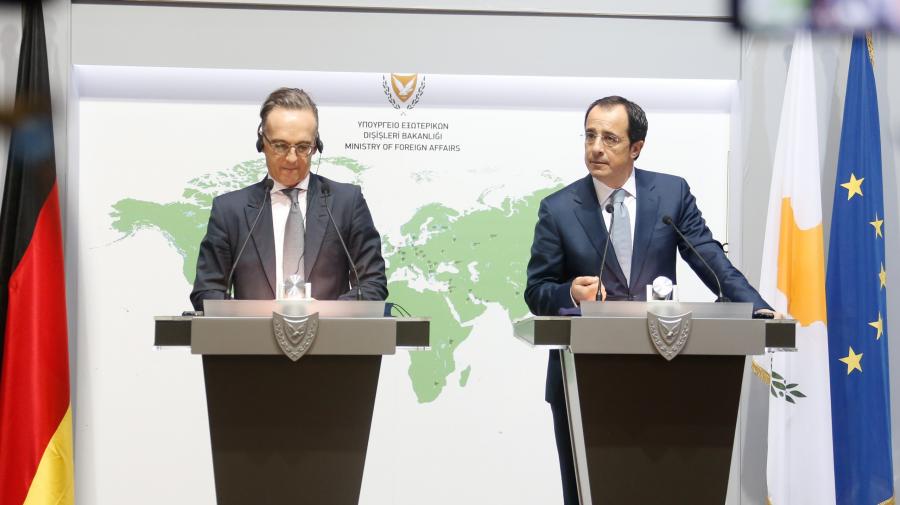 Today, I welcome my friend, the German Foreign Minister, Heiko Maas, to Nicosia.

Your visit, dear Heiko, takes place at a very critical time, both for Cyprus and for the Eastern Mediterranean, as well as for Europe itself.

Your presence here reaffirms Germany's interest in the developments in the Eastern Mediterranean and Berlin's effort, which we welcome, to ensure conditions of security and stability in the region and protect the interests of the European Union. I would like to thank you publicly for your interest, as well as for the German initiative.

Only a few days after the debate in the European Council - during which the European Union sent clear messages to Turkey through a two-pronged approach, calling upon Ankara, among other things, to end illegal activities and to respect the sovereign rights of the Republic of Cyprus as a precondition for achieving a mutually beneficial EU-Turkey relationship ― Turkey has unfortunately once again chosen to maintain and escalate tensions against Cyprus and Greece.

Following yesterday's discussion at the Foreign Affairs Council in Luxembourg, Heiko and I also spoke about Turkey's provocative opening of the coastal front of ​​the fenced area of Varosha to the public. Turkey took this illegal action despite efforts made by the UN Secretary-General, and the German Chancellor herself to deter it.

In the face of all the unacceptable activities taking place in the territory of one of its Member States, the European-Cypriot citizens, members of the large European family, look forward to the effective response of the European Union. This, after all, is the cornerstone of the Union - solidarity and the defense of International Law. In this context, we welcome today's statement by the 27 Foreign Ministers of the Member States on the fenced area of Varosha and we expect that in the face of the continuing Turkish provocation, the EU will take substantial steps to put an immediate end to any illegal actions. I could not agree more with yesterday's statement by Heiko that Ankara must put an end to the game of swinging between de-escalation and provocation.

The steady and sustained de-escalation that will result from the end of the Turkish provocations will strengthen the stated intention of the UN Secretary-General and the international community to take the initiative towards the resumption of negotiations for a comprehensive solution to the Cyprus problem.

It is another reason why it is important for all those holding talks with Ankara, and especially Germany in its capacity as the Member State holding the EU Presidency, to emphasize in a clear and unequivocal way the importance of ending Turkish illegal activities.

For our part, let me reiterate once again that we remain fully committed to the goal of resolving the Cyprus issue through the resumption of talks from where they stopped in Crans Montana with the sole aim of resolving the problem on the agreed basis of a bi-zonal bi-communal federation.

Our common home, the European Union, was born from the ashes of World War II and has evolved into a unique project of peace, with its main pillars being the rule of law, solidarity, respect for International Law and the principles and values ​​established by the Treaties. A peace project that served as a catalyst in the reunification of Germany in 1990 and which we truly believe can contribute in the same positive way to the reunification of Cyprus. We therefore look forward to active EU involvement both in achieving the resumption of talks and throughout the negotiations.

Again, dear Heiko, thank you very much for your presence here and especially for the frank and open discussions.