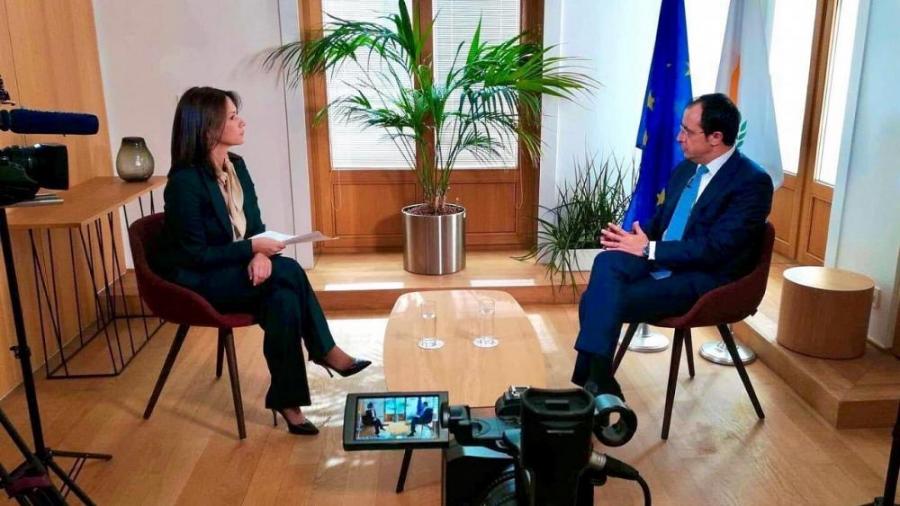 The following piece was reported on Euronews website, from the interview given by Foreign Minister Nikos Christodoulides to Efi Koutsokosta.on 21 September 2020, at the end of the Foreign Affairs Council session.

Cyprus' Foreign Minister suggests taking Eastern Mediterranean tensions with Turkey to arbitration at The Hague, as the question of sanctions has soured discussions in Brussels.

"Only dialogue can bring a solution and in this context, we have asked from Turkey to discuss our maritime borders in the North and West of Cyprus. And they refused," Nikos Christodoulides told Euronews in an exclusive interview on Tuesday.

"We suggested to go to the International Court in the Hague. We are ready to accept whatever the Court decides and as Turkey claims that they have a very strong legal position, the Court is in charge to decide. But so far there is no positive response by Turkey," he continued.

Cyprus blocked the decision on Belarus, denying it as veto unless similar measures are adopted against Turkey for what it maintains is illegal drilling in Cyprus' ´Exclusive Economic Zone.

Christodoulides said that the EU shouldn't react "a la carte" to violations of sovereign rights, referring to Turkey and its illegal activities in the Eastern Mediterranean.

"The Republic of Cyprus supports and does not raise the issue of veto or anything else regarding Belarus. There is no way we are against the adoption of measures against the regime in Belarus," explained Christodoulides.

However, Cyprus insists it will give the green light to sanctions against Belarus and against the Lukashenko regime only if sanctions on Turkey move forward.

Christodoulides points to a previous meeting in August in Berlin.

"We insist on the implementation of the political agreement reached in Berlin. We do not link sanctions and I stress this because it is not our own interpretation, Mr Borrell himself said so in public and in the European Parliament and in public statements but also before the Permanent Representatives and called on all states to implement the agreement reached in Berlin," he said.

European Commission president Ursula von der Leyen said that Member States should speed up the decision-making process and that in some foreign policy matters decisions should be taken by a qualified majority and not by unanimity as is the case now. By changing the rules, smaller countries like Cyprus could lose out.

"What will play the most important role in decision-making should be the European interest and not the national interest of some states," Christodoulides explained.

"If we do not first determine what the EU's interest is, it will be very difficult for Cyprus and many other Member States to agree to such a qualified majority decision making on foreign policy decisions."